The Traditions of Ramadan 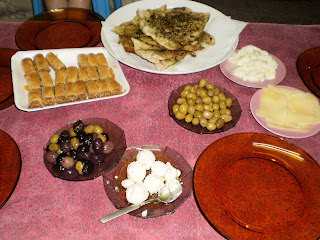 The Traditions of Ramadan
Mike Ghouse

It’s celebration time when Muslims around the world anxiously wait for the first moon of the ninth Lunar month to appear on the sky. The families gather in their backyards, or get on the nearest hillock or climb on the top of their homes and wait for the pencil thin moon to appear on the horizon, and when it does, jubilation begins.

It is Chandni Raat or the moonlit festivities, even though the moon disappears within an hour; it is still the moonlit night and the spirit of celebrations continue.

As the Christians do the count down from the first day of Christmas or Hindus express devotion for each one of the nine days through Vijay Dashami or the Jews follow eight days of Chanukah, Jains observe eight days of Paryushan, and others follow similar path, the Muslims count the next 29 to 30 days with a sense of piety. 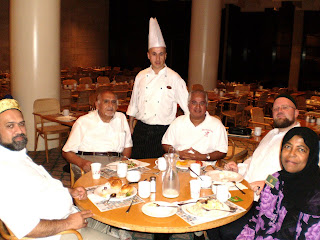 With small variations in practices, families rise up early around 4:00 AM and gather in the kitchen to participate in cooking, sharing the meal and being together as a family unit. Every one has to finish off the food and water intake five minutes prior to sunrise or the morning call for prayers. The youngest one in my family waited for the last second with a glass of water ready to gulp down before the first call for prayers, followed by morning prayers at home or Mosque, and then everyone was free for rest of the day.

Throughout the day a conscious effort is made to abstain from food, water or temptations that are detrimental to self-discipline. Those who do not observe fasting, honor the ones who do, by not eating or drinking in their presence.

One should remain steadfast despite temptations, many a fast observing Muslims are open to their friends eating, indeed it adds to one’s will power to resist the temptation to eat, thus enriching ones’ faith and discipline.

It is customary for a Muslim to ask the other if he were observing the fast, perhaps it may be the desire to be sensitive to the other. However, I would urge one to live his or her own life and not even ask the other and cause discomfort, after all no one but you is responsible for your actions.

One of the most beautiful aspect of Ramadan is the domino effect other Muslims have on you to guard yourselves from greed, anger, ill-will, malice, hate, jealousy and other ills of the society. One feels pious during the month. Of course, there would always a small percentage in a group, who do not receive that wisdom.

Most Muslims pray five times a day and a few do three or two and some none. Prayers are congregational or individual and are performed in the morning, noon, afternoon, evening and the night, bracketing one from getting off the track.

Prophet Muhammad had initiated a healthy way of breaking the fast; it was graduating the empty stomach with munchies like dates, fruits and veggies to prepare the digestive system for a full meal after the prayer break. Dates are the most popular item around the world, they are chewy, meaty and tasty after a long day of fasting, and dates are also a preferred item as it was for the Prophet.

The breaking of fast, also known as “Iftaar” has become a community event, where Muslims invite their non-Muslim friends to join in their celebration of the day. President Clinton started the tradition of holding an Iftaar party carried forward by President Bush and now President Obama. It is a major social event for the politicians, just as it is with Christmas, Rosh Hashanah, Diwali and other festivities.

The night prayers during Ramadan are called Taraweeh, the prayers are much longer than the other times, typically twenty two units of prayers as opposed to four units during the regular nights. All the thirty Chapters of Qur’aan are recited from the Imam’s memory (Hifz) during this month.

At the end of 29th or 30th day, depending on the moon sighting, NASA or other traditions, the fasting would come to an end with the celebration. It is a major event and Muslims gather in a large space and perform their thanksgiving prayer. The traditional greetings are “Eid Mubarak” (Eid is pronounced as in eel but with a d – it is eed), a near equivalent of Merry Ramadan.

On this day one formally forgives and gets forgiven and starts the year with good will. Every one hugs three times; I am your friend, you are my friend and together we are friends.

Traditionally every one in the family wears new clothing, a symbol of starting over with a clean slate. The oldest one in the family passes on gifts and cash to younger members of the family to spend as they wish and to teach responsibility with freedom.

It is also a time to share one’s wealth with the needy; it is like the tithe and is called Zakat. Every family takes out 2.5% of the value of their assets and passes on to the destitute usually through institutions such as a mosque. It is considered an investment in human capital, to help uplift every one on a level playing field to maintain a sustainable good in the society.

On the culinary side, it is a feast! A variety of dishes are prepared, over the years I have discovered that the most common item around the globe is a dessert made out of vermicelli’s, i.e., hair thin noodles cooked in Milk with nuts, dates, honey and other goodies, it is both in liquid and solid formats.

Though the annual ritual of fasting takes thirty days its true destination is endless. May we always hunger to discover our heart. May we always aspire to find our balance, connect with each other, open our hearts and minds to fellow beings; the joy that comes with it is ours to keep.

For fasting to be truly universal, its benefits must extend beyond the fraternal ties of Muslims and must extend to forging a common humanity with others. Fasting is meant to impart a sense of what it means to be truly human, and its universality is reflected by its observance in Bahai, Buddhist, Christian, Hindu, Jain, Jewish, Sikh, Zoroastrian and other faiths.

This is two of the three articles on Ramadan. The first one was published in Washington post - http://newsweek.washingtonpost.com/onfaith/guestvoices/2010/08/the_essence_of_ramadan_is_to_become_humble.html

Happy Ramadan, Rosh Hashanah and Navaratri.
Mike Ghouse is a Speaker, Thinker and a Writer on Islam and Pluralism and is a frequent guest at Media offering pluralistic solutions to the issues of the day. His work is listed on 22 of his blogs and two websites listed at www.MikeGhouse.net
Posted by Mike Ghouse at 8:35 PM 3 comments:

The Bohra Masjid in Irving.
This was quite an enriching experience...

Beautiful Mosque,
Verses from Quraan written on the crown of the walls

All men wore white kurta pajama and a gold laced cap,
I have never seen such a uniformity and admire them for doing that, reminded me of a Ramadan picture from Indonesia where thousands of women were shown wearing white hijab and white clothes and wondered if it was real.. well here it was real. The Jain community does the same, at the Parliament in Melbourne, they all had donned white clothes, same goes with the Brahmakumaris..

Imam Asghar Ali represented Muslims in the 3rd Annual Unity day
Taher Bhai and friends were kind to me in introducing and
speaking to the members of the masjid and inviting them to the unity day
I surprised myself that I gave a speech in Urdu without thinking about it..

There is a cohesivness in the community

there was a strong sense of community, the sense of belonging to each other
just about every one is a doctor, engineer, entreprenuer or an IT person.
this is something I miss acutely in the Sunni tradition... in general.

great food,
and was such a delight to see Malida - a mixture of wheat grains, brown sugar and nuts.. that my mother and grand mother used to make and I enjoyed it... I would say it was some thirty years ago I had the Malida.

It felt like home.. Taher Bhai, Mustafa and Mr. Ford walked me to the car... that was super nice of them.

Tonite is a special nite for them, it was their 30th day and they will be up all night praying.

This community is very service oriented and it was a delight to see them serve and build at the habitat for humanity, at Schools and other places.

Wearing a beard and or wearing a Hijab and serving others truly builds a postive identifiable image for Muslims.

One was talking about President Bush, recognizing him for his beard and cap and asking him how is his highness - reocognizing Syedena Burhanuddin, the spiritual leader for the Bohra community.

It was so good to hear them talking about serving others, that invariably will build a positive image for Muslims as contributing members of the society towards peace and growth of America.

Just about all men wore long beard and the caps, indeed the Imam asked me the three thing I noticed... and beard was one, the clothing and the cohesivness and the respect they give to their imam and the leaders

Washing the hands in a bowl, that I remember from my childhood, then sitting around a large plate and sharing the meal... something I remember when I was 6-7 years old we did in our family.. remember it vividly.
Posted by Mike Ghouse at 12:53 AM No comments: