THE PLAN: Iftaar at a mosque from every denomination including: Ahmadiyya, Bohra, Ismaili, Shia, Sufi, Sunni, Warith Deen Muhammad, Wahabbi and others. You are welcome to join me or experience it yourselves, we have to learn to respect the differences and appreciate the uniqueness of each tradition. God says the best among you is the one who knows each other for peaceful co-existence.
......................................... ... 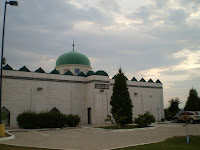 Madinah Masjid is perhaps the only Mosque in town where you find a steady presence of people for Iftaar, be it a weekday or weekend, Iftaar refreshments and meals are served for the full length of Ramadan, 29 or 30 days. 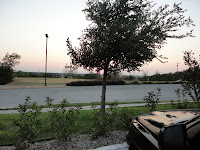 I could not resist taking the picture of sun going down almost touching the ground over the horizon way away in the clear skies. Would you believe the temperature was 105F at 8:25 PM? It was like standing in front of the open fire pit. 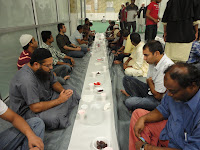 It was nice to see the organization at works; two rows of white sheets were laid out for people to sit around; in all four rows with about 80 people. On the men side eight individuals wore brown chef jackets and were ready to serve. They were wearing hand gloves and setting the plates on the floor, it was incredible to see this formality in the mosque. 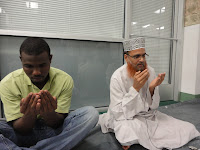 At 8:27 PM, two minutes before the time to break the fast, the Imam started reciting scriptures of blessings followed by Amens for each verse. At 8:29 the Adan (Azan), the call for prayers began and once again with a short grace, we broke the 15 hours fast with the Dates. Prophet Muhammad (pbuh) obviously chose the dates to break his fast and Muslims around the globe emulate to honor the prophet (please check day 2).
This Mosque opened up in the early 2000 and has carried the unique tradition of celebrating Milaad (Prophet Muhammad’s birthday), Observing Muharram (Ashura, mourning of the death of Imam Hussain), Gyarveen (honoring a saint) dinners, Chehlam (remembrance of the departed souls on the 40th day) and a host of other festivities that most Mosques do not allow. There is a room for everyone here, although a few Muslims may not visit the Mosque as they are not comfortable with a few traditions. I thank God for blessing me with the mind to appreciate all the uniqueness and to respect the devotion by each Muslim as well as people of other faith or no faiths. 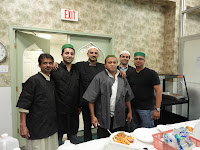 The Ritual prayer is called Salat in Arabic and Namaz in most of the subcontinent and perhaps Turkey, as I heard Imam Dr. Kavakci utter the word Namaz in my conversation with him on the first day of Ramzan (Ramadan). Like the Makkah Masjid (Day two), in this Mosque the word Amen is said quietly after reciting the first chapter of Quraan in units one and two of the three units of prayer. Similar practice of reciting dua (supplication) after the Namaz is followed in the Mosque as in Makkah Masjid.


After the optional prayers, men were asked to sit around the sheets on the floor while the volunteers in the uniforms served the dinner; it was all clean and hygienic work! Another volunteer walked by and collected the paper plates and cups in a bag. 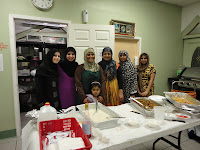 Javed Hyder is a friend who heads the volunteer services at the Mosque and I have watched him consistently serve the community for over four years. He is a fellow Home builder and a fellow Bangalorean and was an office neighbor.  I asked them to gather up for a picture and they did, not only that, Javed asked me to take the picture of the volunteer women folk and it was good to see familiar faces and teens on the team.

If you wish to get a complete picture of the different practices, please review the daily record as I will do my best to avoid redundancy over the next thirty days.
Please do not forget to read the Politics of Ramadan; it is written for Non-Muslims to relate and understand the traditions. Hence you find a constant reference to Jewish, Christian, Hindu and other traditions. Unless people can relate with our practices, they won’t be able to grasp it. We are guided in the Quraan to know each other. Knowledge leads to understanding and understanding to an acceptance and appreciation of a different practice.

Rituals - There are several variations in rituals and they vary from place to place. In Bangalore where I am from, the whole family gets up early around 4:00 AM and together cook extensive meals for Sahri /Suhoor, while others choose to cook earlier night and just warm it up and eat in the morning. The Iftaar is done elaborately at mosques, homes or other gatherings where friends from different faiths are invited to break bread and nurture goodwill.
Posted by Mike Ghouse at 9:00 PM