THE PLAN: Iftaar at a mosque from every denomination including: Ahmadiyya, Bohra, Ismaili, Shia, Sufi, Sunni, Warith Deen Muhammad, Wahabbi and others. You are welcome to join me or experience it yourselves, we have to learn to respect the differences and appreciate the uniqueness of each tradition. God says the best among you is the one who knows each other for peaceful co-existence.

Alhamdu Lillah, all praises to the creator for blessing the world with diversity. I am pleased to highlight the uniqueness of each tradition on a daily basis and I hope we can cherish it. If you think of sharing your Ramadan experience, time is to start now.

The tradition is to gather and listen to a pre-Iftaar lecture (Dars) based on verses from Quraan. The talk was about Prophets Moses and Khizr (knows as the Green man, apparently because of the legend that he lived a long life) and obedience to God’s commandments.  A similar tradition is followed at the WD Muhammad denomination. 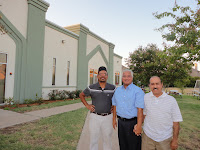 The Ahmadiyya Muslim community has initiated a blood drive with a lofty goal of donating so many bags of blood by 9/11.  It is a symbolic gesture of giving to America the most precious item one has; blood.  We are working on having the announcement to be made on the Unity Day on Sunday, September 11, 2011 at 5:00 Pm at the Unity Church in Dallas.  Details are at www.Unitydayusa.com you are invited to join us. The Muslims of the Bay area are also doing something similar there per the Shia Imam I met last night. These are great initiatives.

Breaking the fast :: About 8:26 the guest speaker finished his talk (Dars) in time for breaking the fast, they brought trays full of Dates for each one of the congregants to grab a few, utmost three. It was a tradition of Prophet Muhammad to snack-on up to three dates prior to the prayers.  I cannot get over the math– 3 x 1.6 Billion Muslims, i.e. 5 Billion dates on any given day and for 30 days you are looking about 150 Billion dates consumption. As much as I know most every Muslim around the world observes the fasting and snacks on the dates. The dates from California, Morocco and Madinah (Saudi Arabia) are delicious, popular and meaty. 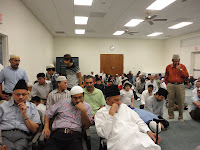 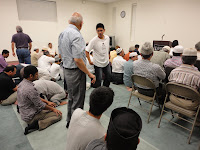 The Evening (Maghrib) Prayer consits of 3 units of prayer (Rakat)  and the same verses from Quraan are recited every where in the world. I heard the word “Amen” out loud in unison by the congregation at the end of recitation of first chapter in the first and 2 units (Rakat) of prayers.


The Sunni and Ahmadiyya traditions are the mirror images of each other.  In the Ruku (kneeling) posture the congregants quietly recite  “Subhana Rabbi al Azeem” three times, simply put God is great and at the Sajda (prostration) “Subhana Rabbi Al Aala” again it means God is supreme and is repeated three times as well.  The rest of the rituals are identical including turning the head to the right and to left to conclude the prayers with blessing of peace to the people on the right and the left.

The three units (Rakats) of prayer are the obligatory prayers for the evening (Maghrib) followed by optional prayers of two sets of two or four units of prayers.  One thing I noted but not sure about is – after the obligatory (Fard) prayers every one moves to a different spot to pray in the Sunni congregation (Jamaat), here the individuals prayed on the same spot and perhaps because of  lack of space.

My reference to Sunni is not because it is a standard or some such thing, but simply because that is the tradition I am familiar with and that’s the way I have learned to explain. It also makes sense to share it with the majority of Muslims (85% Sunni) who are not familiar with the other traditions. I must make a point to admire one of my favorite Imams Dr. Yusuf Zia Kavakci who is an amazing pluralist, he may not relate with the word but I see it that way.  When he talks about the dos and don’ts of fasting, he invariably makes a point to say how it is done in the Hanafi, Shafii and other traditions without making the slightest point that one is better than the other, it is simply a different tradition. I pray that we have more Imams like him.
One of the timeless advise Prophet Muhammad shared was to live a regret free life, meaning do not judge people without verifying and regretting it later for being judgmental. Quraan 49:6 “If any iniquitous person comes to you with a tale, use your discernment, lest you hurt people unwittingly and afterwards be filled with remorse for what you have done.”  There is a lot of myth created about the Ahmadiyya Muslims from a pure political point of view,    and the fodder they get is also from the same myths. It is like the right wingers who keep reading mistranslations of Quraan and for clarification they go back to the same mistranslations again and draw deeper but false conclusions.

I pray that in this holy month of Ramadan we Muslim shed our biases and believe that God alone can judge what is in one’s heart; and let’s not burden ourselves with misunderstandings and myths about others. Let everyone live their life as they wish and let’s make an effort to live a regret free life in the footsteps of Prophet Muhammad.

The dinner was ready and everyone got their plate and the food.  Fresh Salad, Naan, Daal and Goat curry.  I went back for the Daal for the second time as it was good.  A few of us seniors (LOL I never thought I was one and I am taking that identity without resistance) gathered around the office conference table and shared stories.  One of the seniors was the general secretary for the Ahmadiyya mission in the United States, he flew in from California, he is a son of the legendary Muslims of the pre-partition India; the Johari brothers.  I completely forgot to take the picture and was blessed to sit with a few Buzurgs (endearing term for the seniors).  OMG, I am one of them now!  I don’t know how my nieces and nephews view me as a senior... ?

The Buzurg talked about the upcoming conference in California where the people of different faiths read their holy scriptures on a given theme. Suhail Kauser my friend shared about the Quraan conference we held and possibility of the Sharia conference in March next year.

Murabbi (Imam/pastor) Zafrullah Hanjra will be here in Dallas for a week from tomorrow, he is the mission Chief for the South west Region. I have grown to like him, he is man of patience and wisdom and I enjoy visiting him in Houston. 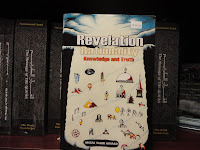 The Ahmadiyya literature has quite a lot of research on science and religion, I believe one of their Khalifas (Religious leader) had said, Quraan is God’s word and Science is his action.  Dr. Jari Khan presented a book to me “Revelation and Rationality – knowledge and truth” and I hope to read it in the coming weeks. Meanwhile I am reviewing a book on Peace in Israel and Palestine to be released on the day of United Nations vote for the statehood of Palestine.  I hope to contribute a few good paragraphs in the book.

May you be blessed, Insha Allah, I will be at WD Muhammad Masjid tomorrow.

Rituals - There are several variations in rituals and they vary from place to place. In Bangalore where I am from, the whole family gets up early around 4:00 AM and together cook extensive meals for Sahri /Suhoor, while others choose to cook earlier night and just warm it up and eat in the morning. The Iftaar is done elaborately at mosques, homes or other gatherings where friends from different faiths are invited to break bread and nurture goodwill.
Prayers - The ritual Muslim prayers involve several postures... I will update the details before the end of Ramdan. 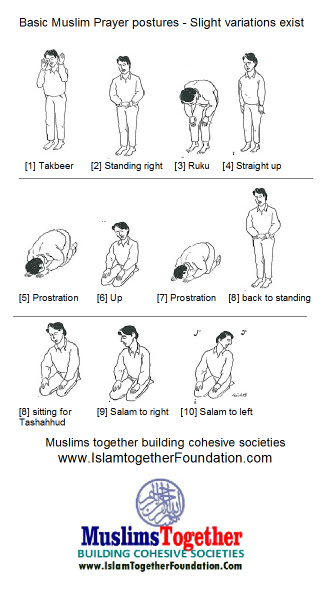 Muslims and must extend to forging a common humanity with others, Send gifts to Pakistan from UK.