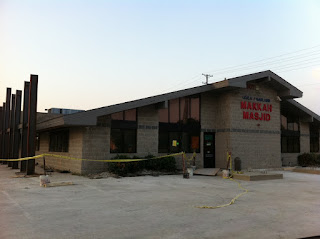 During the work week, very few can make it to the Mosque for Iftaar (breaking the fast with refreshments and at times combined with meals). I went in early to the Mosque in Garland, which is predominantly frequented by Memons, a group of Muslims from Gujarat and Sindh areas of India and Pakistan.


A group of about 18 people gathered in the eating area of the mosque and sat down on the floor in a circle. After the grace prayers, every one breaks the fast  in unison.  Dates are the most common item the world over, indeed, if all the 1.5 billion Muslims were to fast, that’s at least 5 billion dates consumed in one evening. The other items are usually Milk or Yogurt products and a fruit or two with varied items, here in this mosque Haleem (ground lentil and meat) was on the plate. Refreshments are shared to prepare the stomach to receive full meals after the prayers.

Ritual prayers: The same three units of prayers are prayed in congregation throughout the world, however, the rituals vary, and Muslims are as diverse as they can be.
In the standing position, one stands with his or her hands folded over chest, tummy or navel while the Imam (prayer leader) recites the first chapter of the Qur'an in Arabic. At the end of this recitation, in most mosques the entire congregation says “Ameen” out loud in melodious unison. However, in this Mosque, the Ameen was said silently. It reminded me of the Mosque in my town where we followed the same practice, however it has changed there now. In last November I was in Bangalore, the practice was to say Ameen out loud. I felt like Rip Van Winkle.
At the end of the prayers, God’s name is recited in three versions on the fingers or the worry  beads for a total of 100 times followed by the common prayers,  where the Imam says short verses followed by Ameen by the congregation on each verse. This is not common in all the Mosques where everyone gets up at the end of the prayers. I will chronicle the uniqueness of each group and sub-group as I visit a mosque a day for the Iftaar, Insha Allah.
On a slow day, I will share the pictorial diagrams of various prayer postures.

Rituals - There are several variations in rituals and they vary from place to place. In Bangalore where  I am from, the whole family gets up early around 4:00 AM and together cook extensive meals for Sahri /Suhoor, while others choose to cook earlier night and just warm it up and eat in the morning. The Iftaar is done elaborately at mosques, homes or other gatherings where friends from different faiths are invited to break bread and nurture goodwill.
Posted by Mike Ghouse at 8:58 PM