Politics of Ramadan on moon sighting 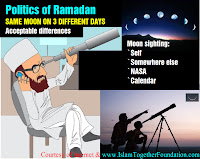 Muslims around the world will begin fasting from Monday, August 1, 2011 and for a whole month thereafter, however, for some it will begin only if the moon is sighted. The story is same with the Jewish and other traditions that follow lunar calendar. Rosh Hashanah like Ramadan comes 11 or 12 days earlier each year.

Since the beginning of Islam, there have been debates as to what constitutes moon sighting. Some interpret that there has got to be a minion to declare that they have seen it themselves with their own eyes and some do not accept it unless they have seen it themselves. It is also acceptable if the moon is sighted elsewhere, but now, each group has to have their own moon sighting. In the United States there is an organization that monitors moon sighting and announces it in advance. The Islamic Society of North America has announced that Ramadan begins on Monday, August one. Over the millennium we learned to accept and respect the otherness of other.

Politics plays a crucial role in our Temples, Synagogues or Churches, Mosques are no different. A few scientifically-inclined-Muslims have adopted NASA’s calculations believed to be precise. However, four different traditions are operating concurrently; i) Strictly Calendar, ii) NASA and iii) Sighting with bare eyes and iv) sighting by others in the community.

The NASA-oriented and the Calendar-group misses out the fun, joy and exhilaration of waiting and watching the needle thin moon on the horizon. The whole family gets out on the roof tops, or higher grounds, some even climb electric poles, and a few will drive out where they can see the sky without obstacles, kids would climb on parent’s shoulders, and a few run from place to place shouting in excitement, did you see it? It is like the belief in Santa Claus, Angels and other myths, each tradition fulfills one’s emotional needs and every one becomes sentimental. After all, if celebration does not have the excitement, it is not a celebration.

America’s spirit of freedom touches every soul, no matter what religion or tradition they follow. American Muslims are no different, they prefer to have a pre-set date to start fasting and the celebration called “Eid” pronounced as Eeed as in Eeel. The idea is for them to take a day off from work or get an optional day off for their children from the schools. Always, the joy multiplies when the family and friends celebrate it together. They prefer to start on a pre-set date and trust the calculations.
The conflicts are the same everywhere on the earth. Each group subscribes to one of the four systems mentioned above. America is no different; you will find celebrations on one or three different days in any given city, the Sunnis, being the largest group has the greater division within, while the Sufis, Shias, Ismailis, WD Mohammad, Bohra and Ahmadiyya follow the pre-determined dates.
The consensus may be attributable to having central spiritual leadership in all groups except the Sunni. However like the American Public wishes to see the Republicans and Democrats drop the party lines and focus on what is good for America, the Muslims also wish they could celebrate the Eid on one single day. It ain’t going to happen, it is human to differ. It is against the spirit of Ramadan to denigrate, diminish and devalue other practices.

The essence of Ramadan is to become humble, simple and free from ill-will, anger, meanness and hate. Let’s fill our hearts with goodwill and honor Ramadan by saying “Eid Mubarak” or Happy Eid to everyone who celebrates on a different day in the same town. The essence of Ramadan is joy and let’s not prick any one’s bubble; God has not signed a pact with any one behind others back, let’s rejoice the differences of interpretations. If you want to celebrate every day, go to every celebration.

In the spirit of Ramadan, I pray that Ramadan gets into our hearts and minds and make us embrace all factions of Muslims without undermining their tradition and further pray that we treat every human on the earth with dignity, respect and care.

That is indeed the wisdom expressed in Qur'an, Al-Hujurat, Surah 49:13: "O mankind! We have created you male and female, and have made you nations and tribes that ye may know one another. The noblest of you, in sight of God, is the best in conduct. God Knows and is Aware of everything you do."

The Next article is “The Rituals of Ramadan” followed by the “Spirit of Ramadan”.Ramadan Mubarak!
Mike Ghouse is a speaker, thinker, writer and a frequent guest on Hannity show and nationally syndicated Radio shows and Dallas TV, Radio and Print Media. He runs America Together Foundation and is committed to building a cohesive America and offers pluralistic solutions on issues of the day. Over 1000 articles have been published on Pluralism, Interfaith, Islam, India and cohesive societies. Two of his books are poised to be released this fall on Pluralism and Islam. He is available to speak at your place of worship, work, school, college, seminars or conferences. His work is encapsulated in 27 blogs, four websites and several forums indexed at MikeGhouse.net.
Posted by Mike Ghouse at 2:03 PM

My comments on Faridi saheb's email:
It is an unfortunate fact that wide differences exist between scholars of Islam. Some of them interpret verses and hadiths literally without reasoning and logic without understanding their underlying principal.. Islam is a perfect and simple religion. Much depends on your own (neeyat) intentions for carrying out your religious duties whatever Ffiqah you follow.

The logical reasons for adopting astronomical calendar based on appearance of crescent at Kaaba so and making Kaaba dateline for Islamic Hijri calendar so that ummah all over the world maintains uniformity in religious festivals. death anniversaries of Holy Prophet SWS and specially Lailtul Qadar.
What Quran described 14 centuries ago is now recognized and calculated by astronomical science .
It seems odd that Muslims in some cities like New York celebrate Eid on different days disagreeing with each other when Ramzan has begun and when it ends.

010.005 It is He Who made the sun to be a shining glory and the moon to be a light (of beauty), and measured out stages for her; that ye might know the number of years and the count (of time). Nowise did Allah create this but in truth and righteousness. (Thus) doth He explain His Signs in detail, for those who understand.

JUST AS JUMA PRAYERS ARE OFFERED AROUND THE WORLD WITHIN 12 TO 16 HOURS EACH MONTH OF ISLAMIC CALENDAR MUST BEGIN WITHIN THAT GAP NOT ON DIFFERENT DAYS OF THE WEEK.