13th day of Ramadan around Israel 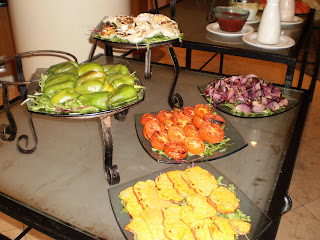 Amazing food for Sehri at the Hotel Dan Jerusalem; fresh vegetables and fish... that fish was so good. It was indeed a very long day going up from Jerusalem to Golan Heights, Sea of Galilee and the Mount of the beatitudes and other places.

We went to Jericho, proclaimed by them to be the oldest city in the world and passed by the Mount temptation where Jesus was tempted by the devil to give up meditation but failed. 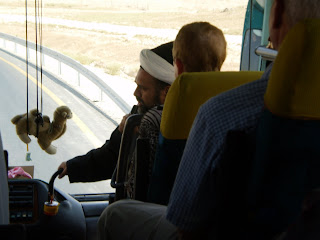 Stopped by Jordan River at the very spot Jesus was baptized, and I walked right in along with several others. I was the second in line and asked the Pastor to dunk me in the name of Allah and without blinking an eye he did, Imam Jensen followed the suit along with Karen and others. It was quite an awesome feeling to be purified where Prophet (to me) Jesus was Baptized.

Tiberias is a historical place where historical Jewish people have lived and have been buried, it is the place where the Mishnah (Talmud) was born, thus the Jewish oral religious tradition began.

We did not get to go on the replica boat believed to have been the boat used by Jesus, found a few years ago at the bottom of the sea of Galilee. 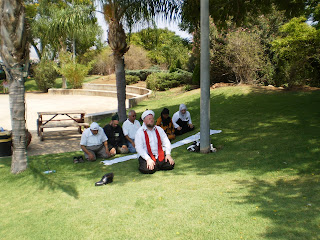 Mount Beatitudes was awesome with a huge valley and the sea of Galilee on the south. Apparently Jesus saw the beauty of looking towards the sea through the valley, and an Italian Architect is redesigning the churches with that point of view; a window to see the outside. Here is where Jesus delivered his famous sermon on the mount (Matthew 5:1-3) blessed are the peace makers.

The six of us prayed on the grass knoll outside a Restaurant while the other members had a wonderful sea food luncheon there.

Nazreth was just incredible where Jesus was born. 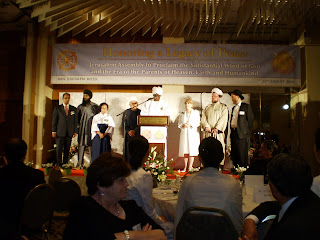 The whole valley around the Sea of Galilee is beautiful and Jesus taught along this valley. It is lush green with mango and banana groves. We missed Yad Vashem and Masada.

We were running late to do the Iftaar (breaking the fast) at the hotel and the six of us on the bus were trying to figure out how to handle it. Imam Abdullah Hasselhoff went to the microphone on the bus and explained the Adan, the Muezzin's call to prayers and shared the essence of fasting.

Mufeed, the Palestinian driver offered water and dates to break the fast. Later on at the dinner event (I think it was the next day).

Iftaar became a part of the meeting. Here is a good story to share; the speeches were going beyond the Iftaar time and we had to break the fast. A Rabbi sitting on a table two tables down along with other Muslims text messages his wife to find the sunset, and then relays that to the people on his table. He also took the initiative to call on the wait staff to bring the water for breaking the fast. That is the spirit we all need to develop.
Posted by Mike Ghouse at 4:11 PM