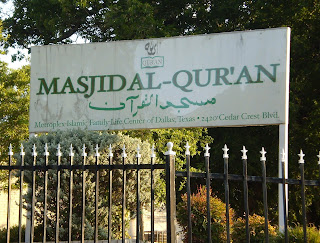 My visit to the Warith Deen Muhammad Mosque Masjid Al-Qur'an in South Dallas was eventful.

I was an hour early and unlike all other Mosques, the Qur'aan lessons were on. Imam Muhammad Shakoor was speaking and asking the men and women sitting around the tables to read verses from Sura 22 titled Hajj and then he would ask questions and would answer them. It was quite an interactive session. 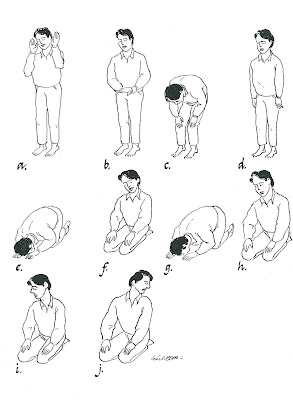 mam Shakoor is easy relaxed and humorous in his conversation. I enjoyed the way he was talking about how the Shaitaan attacks ... from the front, back, left and right... and from every where... he was literally doing the chicken dance and it sure was fun to see the Imam with life.

He talked about the Ground Zero Mosque and suggested patience is the virtue, and believed that when facts emerge, things will fade. He referred to 9:32, 6;122-125 and several other verses. He also shared the story of Samson and Delilah and Adam in this context. Where they were given bountiful and were asked to stay away from one item... and they did not, like wise God asks us not to rush to conclusions until all facts are in; patience is the virtue.

Right at 7:56 we broke the fast and the dates and snacks were all set on the kitchen table that men and women took along with water.

You may find in tune with my observation here, at the position h (in the figure) of the Salat, most of us recite Attahiyat followed by two daroods and a Duwa and then Salaam to the right and then to the left.

Imam Shakoor takes the same time as the people behind him, however, I have been to places and wondered what the Imams recite? I could do the recitation twice, and they are still sitting around... next time I will ask the Imams what takes them so long? or What do they recite that I am not familiar with!

From what I have learned, especially during the Ramadan, the evening (Maghrib) prayers are to be prayed with short Chapters (suras) and complete the Salat to make it easy for the person fasting... where do most of them miss it? Particularly when a guest leads the prayers, he takes it forever, what for?

After the prayers we all gathered around the table and ate our meals and several interfaith Jokes were shared it was an easy friendly atmosphere. There was that sense of the community in that Mosque.

Visiting churches, synagogues, temples and other places of worship, I accutely notice the sense of community, where as most of the mosques I have been to - a majority of them dash in a minute before the time to break the fast and out again after the prayer. There is a lack of sense of community in some places. Not a bad idea to at least take 30 mintues before breaking the fast to touch upon the current isssue.

Mike Ghouse is speaker and thinker on Pluralism and Islam offering pluralistic solutions to the media and the public on issues of the day. His work is captured in 22 blogs and 3 websites listed at http://www.mikeghouse.net/
Posted by Mike Ghouse at 8:19 PM