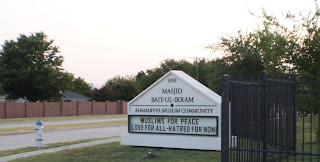 My Iftaar stop was at Ahmadiyya Mosque in Allen, Texas. I have been to this Mosque about three or four times before. Just about every know me and I knew most of the congregation there. Tariq reminded me about their national leader on my Radio show some 14 years ago when I had launched the first Asian Radio in Dallas.

I was hoping to be acquainted with new rituals and to my surprise; it was no different than going to any one of the Sunni Mosques in Dallas area. The only new thing was the educator was reading and explaining the chapter 95 Al-Teen and did a great job followed by breaking of the fast with dates and the Indian-Pakistani tempuras (Pakoras). 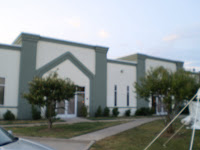 Imam Malik Mohammad led the prayers and prayer ritual was exactly the same as the Sunni tradition. After the prayer they talked about the Floods in Pakistan and their charity that serves out there. I was taken back when Imam Malik introduced me to the congregation and it was good to be with them.

A few Muslim may question following the Imam other than my own tradition, it is not the Imam, it is your own intent, niyyah that counts. It is the same argument I am having with Sean Hannity on Fox TV - the character of Imam does not matter to me, like every one, he will come and go, butit is my niyya that matters to me the visitor.

I asked them to join me going to other Mosques about breaking the fast, and most of them were aware of my schedule published at World Muslim Congress.

The dinner was traditional Indian (my reference, they call it Pakistani) chicken Qurma, Rice and Kheer. Met with Professor Qudsiyah who wants to be involved in interfaith work and Robert Hunt of Perkins school of theology at SMU had mentioned to her about my work in Pluralism as well. She is a professor of Law and speaks on Islam. 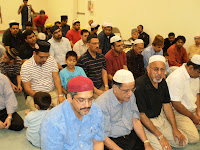 On the Dinner table Dr. Jari Khan, Tahir and three other gentlemen and their outreach coordinator carried on the conversation about Prophet Muhammad. I talked about the example set by the prophet of respecting the otherness of other; when he signed the peace treaty with the Meccans in Hudaibiya, his name was signed as Muhammad the messenger of God to which they objected, “your followers may believe that, but to us, you are Muhammad son of Abdullah” – Prophets Associates objected the removal of the phrase messenger of God, but Prophet saw another point of view and respected the otherness of other and had his signature reaffixed as Muhammad son of Abdullah. That is one of the greatest examples of Pluralistic attitudes that the Prophet wanted people to follow.

They presented me with a copy of Qur’aan with translations by Maulawai Sher Ali. The first thing I do is go to the first chapter, verse 7 as that has been one of the mistranslated verses both by a Muslim for his political desires after the fall of the ottoman empire by the European Kings in the 11th Century who deliberately mistranslated Qur’aan to egg their subjects against Muslims.
More about this at: http://quraan-today.blogspot.com/2008/01/unlike-jews-or-christians-17.html

Mike Ghouse is a speaker thinker and a writer on Pluralism and Islam, a frequent guest at the media offering pluralistic solutions for the issues of the day. His work is encapsulated in 22 blogs and 3 websites listed at www.MikeGhouse.net
Posted by Mike Ghouse at 10:01 PM

i agree with Mike. we should come together as Muslims. We should learn to agree to disagree. As notice by Mike our method of prayers and our book is same as all other Muslims. I thank Mike for coming to our mosque and he is always welcome