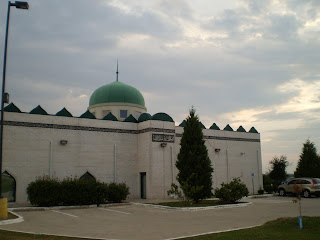 I had an open schedule for Iftaar tonight, lo and behold; I get the call from Fox TV to join them tonight at the Hannity show. Unlike the previous programs that were live, this one was taped due to tight schedules and getting three guests together with Sean Hannity; Dr. Wafa Sultan, Frank Cagney and myself. The topic was Sharia Laws and Ground Zero Mosque (a misnomer), the rest of the story is at: http://groundzeromosque.blogspot.com/2010/08/fox-news-hannity-sultan-cagney-ghouse.html

The taping was done by 7:00 PM to be aired at 8:30 PM and I decided to go to Madinah Masjid in Carrollton. It is like coming home in so many ways, most every one at the Mosque is from the Subcontinent and most of them are Urdu Speaking; my mother tongue.

Javed Hyder has been a strong supporter of this Mosque and is always out there serving the needs of Mosque, a fellow Bangalorean and we chat often. Naushad is another one. We briefly talked about the Quraan burning event coming up in Florida on 9/11, I told him if I get the funds or the tickets, I will go there and pray for the well being of the pastor, just as Prophet Muhammad set the example of praying for miscreants to have God’s blessings of good will. An article is coming up jointly written by Imam Zia Shaikh and me this week.

Things that are unique to this Mosque (I’m yet to visit 23 More Mosques this Ramadan);

Unlike other Mosques, (I have not been to all of them yet, but so far) Madinah Masjid serves Iftaar dinner every night. I mean full service, that is what the man at the counter told us to sit back and relax and they will bring the plated food and they did. The plate was filled with Chick Peas, Mutton Biryani (goat fried rice), Raita (yogurt puree) veggies and fruit salad.

At the end of the recitation of Sura Fateha, usually the worshippers say in chorus “Amen” fairly loudly and beautifully. It was not the same here and this is how it was done back home.

Most mosques do not render supplicative prayers, after the main prayers, but they do it here.

I was a part of three different conversations and literally every one was aghast that the media has slapped the wrong meaning of Jihad on all of us, which is striving to be a better human to oneself and others. A few scholars, who were perhaps politically oriented, like the European kings, have misinterpreted the word to mean armed struggle. In Islam there is no such thing as offensive or aggressive war, it is always to defend oneself, however a few right wing Muslims scholars have gone against the spirit of Quraan, just like the right wing Christians, Jews and Hindus have done with their respective traditions.

Insha Allah, I will do my fitaar at each one of the mosques of Ahmadiyya, Bohra, Ismaili, Shia, Sufi, Sunni, Warith Deen Muhammad and other Mosques in Dallas; including the Mosque at Al-Aqsa this weekend. My theme is Mosque a day - Here is my schedule. http://ramadanexclusive.blogspot.com/2010/08/my-iftaar-schedule.html This blog will carry full stories for 29/30 days of Ramadan.

This is my 7th day of fasting, the 1st day was easy but sleepy, and the 2nd day produced light headaches, otherwise, it is smooth sail. Praise the Lord. Alhamdu Lillah.
http://ramadanexclusive.blogspot.com/2010/08/my-iftaar-schedule.html

Mike Ghouse is a thinker, writer and speaker on Islam, Pluralism and offers pluralistic solutions to the media and the public on issues of the day. His work is reflected in 22 blogs and 3 websites listed at http://www.mikeghouse.net/
Posted by Mike Ghouse at 9:18 PM