9th day of Ramadan on the Plane 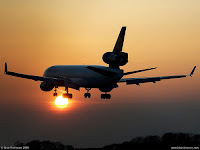 Departed Dallas at 4:20 PM bound to Tel Aviv through Frankfurt in Lufthansa Airlines.

I was trying to figure out the time to break the fast, calculated Eastern time, I was figuring the velocity of the plane around 592 MPH, then added that time to CST... and came up with something like 7:00 PM... but the Sun was still up. So I followed the Sun, the rays and the light was filtering into the plane from the back side as the plane was on the North East flight path and about 6:45 Dallas Time, the sun was sinking somewhere in the west and that was the time to break the fast.

The Flight attendants were serving the food around 5:30 and I asked them to hold it for another hour, and she knew instantly that I was fasting. When the time came for breaking the fast, I asked for the meal and she was saying another 6 hours or so. I reminded here that I had asked them to hold the meal... meanwhile, a German young boy sitting next to me told her something in German that sounded like “bring the food now” and she did.

The tray was marked "Hindu" and I was wondering why did they mark religion, usually it would be vegetarian, Kosher or Halal. The food was good though, I have always enjoyed it at Lufthansa and I have flown on it several times over the years.

The kid next to me was amazing; he was super pleasant; put my bag up in the rack, brought me a diet coke for breaking the fast and was continuously willing to assist me. I could not change the language on the TV, so he pushes a few buttons and gets me English. He was curios about Pluralism and oddly he knew a lot about Islam.

This is the first time I did not read or write in the plane, instead I watched three movies. Bounty Hunter, Date Night and ....?
Posted by Mike Ghouse at 4:06 PM